Harvard researchers now tell us that the optimist outlives the pessimist. Despite, no doubt, of when the latter try to convince that they rather display pragmatism or realism. Really… Hot on the heels too of a similar Yale finding giving the more sunnier disposed of us a full seven years more.

Which oughtn’t be news to winning salespeople. As the oft-cited Martin Seligman finding goes, optimism is the chief successful – defining even – seller trait.

Richard Wiseman offers his own treatise on an aligned topic; luck.

Could it be that you can identify potential selling prowess not just by assessing levels of optimism, but also by how lucky the candidate considers themselves to be?

Apparently, there are four main psychological principles that separate lucky people from unlucky ones.

‘First of all, lucky people are more open to opportunities, spotting them and making the most of them.
Second, they tend to be optimists and that becomes a self-fulfilling prophecy – they’re pushing forward, they’re expecting the best.
Also differences in terms of intuition – lucky people tend to have lucky hunches and trust their intuition.
And finally, they’re more resilient. When bad things happen they’re good at turning that bad luck into good fortune.

So big differences in the way they think and they behave.’

How about the famed Napoleon Bonaparte rejoinder. When criticised for winning battles simply because of luck: “I’d rather have lucky generals than good ones”. I today see that American WW2 General Eisenhower switched good to ‘smart’.

And any sportsfan will know of the time-honoured chirp when dismissed as winning through good fortune, forgetting talent and hard work; ‘the more I practice, the luckier I get’.

Many in Sales will know of one particular adage; luck is a place where planning meets opportunity.*

Indeed, acting like you make your own luck – known as having internal locus of control – is supposedly also a key winning entrepreneurial trait.

Well then. Worth adding this to your list of interviewing question if your role includes evaluating potential new hires?

Who would ever say an outright ‘not very’!

Critically though, this may well disarmingly help uncover their true work ethic and prevailing Sales behaviour.

For instance, have they spotted an opening somewhere unusual, followed a hunch, turned a setback into an opportunity?

Note the core drive from the second trait above of the optimists and the lucky; “… they’re pushing forward, they’re expecting the best”.

Hopefully you’re already probing to see how much of an optimist they are during the interview. Now you can potentially gauge their self-perceived level of good fortune too for further, useful selling suitability confirmation.

Shortly after posting, I saw this photo from inside The Oval, Surrey’s cricket ground, on a MSM live Test match web feed; 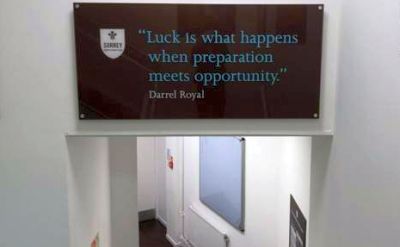 Lovely to see this quote given such prominence. Yet in this form – “Luck Is What Happens When Preparation Meets Opportunity” – it appears shockingly mis-attributed. Surely it ought be duly credited to the Roman philosopher, Seneca…