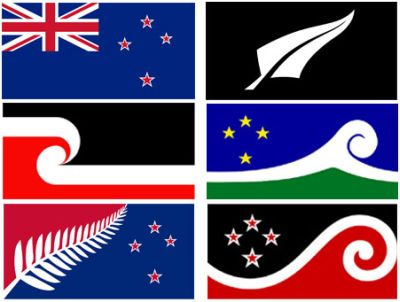 So I sat through a presentation depicting an international firm’s regional goals. Several countries were given a slide and a half each.

Each was announced by a pic of their flag.

I was reminded of how the New Zealand Prime Minister has promised the option of a new flag within three years. Not before time, you may nod.

There’s many kiwi options, most of which appear to be collated online, half a dozen of them make up the picture above.

It would stay in the memory so much better if alternate flags were used for this sales purpose.

And don’t go getting suckered by that rubbish that to mess with a flag is offensive to that country’s citizens. Although some degree of precaution maybe advised to avoid hidden political traps.

A quick surf showed that practically every country has (a collection of) different flags happily inhabiting a particular depth of the web.

I never even knew that Northern Ireland, for instance, has such a wealth of new flag options.

And even where ideas are sparse, just about any flag can be modified. Especially as they’re normally relatively straightforward to replicate in Powerpoint.

Swap in your corporate colours with pizzazz, for instance.

You don’t need to restrict yourself to the original design either. You can use other national colours or current ones in interesting ways. Here’s a (sadly Mugabe-hijacked) Zimbabwe Josef Albers vibe, South Africa’s popular tourist board treatment (brilliant in ppt slide proportions here), and a “rainbow nation” food for thought;

Think creatively, merrily nail your colours to the mast and ensure the audience remembers you.