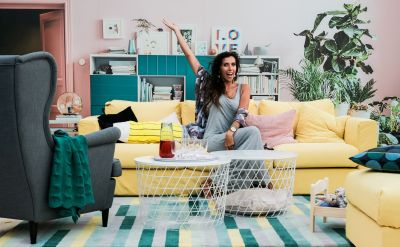 I’ve been a little (maybe overly) captivated by re-runs of three fly-on-the-wall hours behind the scenes inside Ikea.

The first part featured an arc on the production of their annual catalogue.

An eye-watering 203 million copies of which are snapped up by salivating customers. Astonishingly making it ‘the largest publication on the planet’.

Creative Designer Sara Blomquist sought to change the mould. She wanted to progress away from a cover shot that solely crammed in as many items they sold as possible in a curated, made-up room. Her idea was to humanise the pic. Actually put people in it among the homewares.

The example up top is of the type of vibe rejected.

One lady in particular seemed to wield her power by stating that the sight of people “disturbed” her.

Faces were fine for inside, but definitely not for the cover.

Yet I realised there was a happy ending.

2018’s brochure may not have shown life, yet 2019 clearly became Sara’s year. As both that and the current 2020 covers for the very first time showcase actual people, well, ‘models’ any rate I guess, loud and proud.

In part, the fact that deep in their dna they consider themselves as “a furniture dealer” still might have something to do with the reticence to change. No matter how slight that ‘change’ may have been.

All this did get me thinking about how we solution sellers visually display our wares.

Admittedly, many of our brethren sell intangible goods and services. And there’s only so many instagram-ready flatlays of a phone screen you can reasonably take. (See this cropped image from Ikea themselves for instance:) 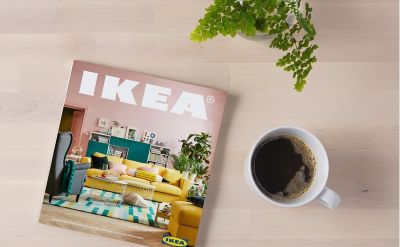 Let’s revel in the eventual evolution for 2019; 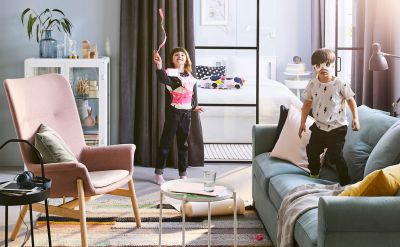 Kids playing, surely always a winner? Then, strangely, they opted to invoke the spirit of Lennon’s love-and-peace sleep-in fifty years prior for 2020. This isn’t quite the actual cover – Ikea don’t sell guitars – but from the same shoot, still you get the idea: 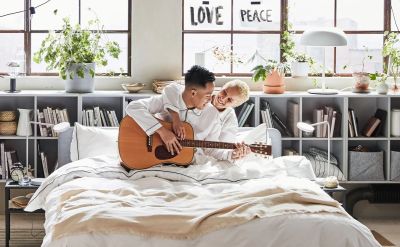 How much influence do you think the ‘failure’ of 2018 had on the mind-switch next time around?

I recall witnessing a photoshoot on my very first salesfloor.

The photographer was the husband of a colleague. He was a pro. I especially remember his arrangement to capture an engineer with screwdriver in hand kneeling next to the exposed innards of a computer the size of a washing machine. And a terrific pic it ended up too.

Marketing will no doubt have a raft of product imagery. Yet sometimes (oftentimes?) the better image is of your ‘kit’ actually in situ. Get permission from your pal on-site and snap away. You never know, in your world the impact can be as big as the Swedish flatpackers.

And as an obvious sales parallel, there’s also perhaps something in recounting this catalogue tale to a prospect. Any that you sense approaches the ‘change’ your project entails with their own touch of trepidation. Or where meetings also feel like the “hen house” of Ikea’s ‘council’.

Are they familiar with the yearly Ikea catalogue?

Do they remember what the cover always looks like?

Which in what you propose is their equivalent of putting people in shot…?