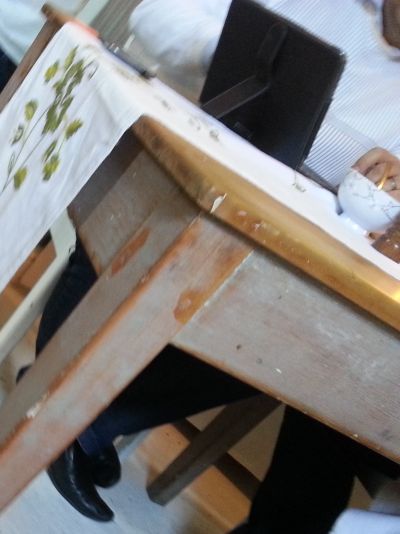 Grabbing a road-bound drink during a busy day, I happened to sit on a table in a cafe next to a pair of Italians. I noticed they were about have a ‘business meeting’. Due to a truly sales alarm.

One of the chaps was looking nervous.

I recognised this instantly.

He looked like a million other people must have at the same time, about to ‘pitch’, all around the world.

It was in the unusually high-tempo shuffling. The jerky unsmoothness of the order-placing dance. And the constant touching of the mounted ipad most betrayed his inner mood.

I took a slightly fuzzy surreptitious pic as seen up top.

The ipad owner was clearly keen to get cracking and show his cherished slides.

Then I witnessed the kind one-way traffic presentation that makes my heart sink.

In the late-90s, I happened to be at an event for resellers of accounting software developer, Sage. Founder Graham Wylie, a rather uninspiring speaker, gave the keynote. Intended to fire up what today might be called his ‘virtual salesforce’, he went for a spot of blatant name-dropping.

He delivered an anecdote about travelling to Seattle to meet with Bill Gates.

He was stressing out. He hadn’t put the finishing touches to his slide deck.

When he got the nod for his 20 minutes with the Microsoft head, the first thing Gates said to him was along the lines of, ‘let’s not go through any slides, I’d rather just talk, wouldn’t you?’

My point is, slides are not the bedrock of a fruitful meeting.

In fact, how often are the best meetings ones without recourse to a single slide at all?

To say nothing of those where your prime weapon is nib on blank pad.

Yes, by all means have something prepared ready. The more obviously tailored it is the better too. But resist the urge to rush and show it.

Instead, think of a good opener. One that fully engages the other person. After front talk that creates comfort, gently get to the nub of the issue.

What are you hoping to do?

Where you looking to go on this?

Why’s now a good time for this?

Which plan is most important right now?

How you wanting to improve things?

That kind of entry. Steadfastly avoiding a relative of what Miller-Heiman refer to as “track selling”. (Which also reminds me of their favoured opener – albeit for further down the line than a first meet; “what are your concerns with this proposal?”)

What you’re aiming at is genuine conversation. A duo in harmony not a solo performance.

Pre-armed with this approach and you’ll be able to say goodbye to butterflies the size of coffee cups flying round your tummy and allow a worthwhile dialogue to freely develop.