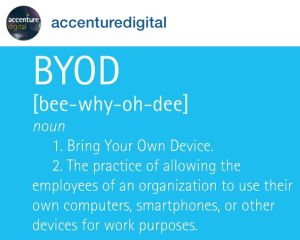 Regular diners out will be familiar with BYO.

Restaurants where you’re encouraged to bring-you-own. Especially when drinking in Aus and S Africa.

Now corporate IT departments seem to have got in on the labelling act.

Employees are increasingly able to use their own devices.

As the above instagram-shot (via consultant Accenture) suggests.

It instantly reminded me of a classic yet failing byo we have in Sales.

bring your own prospects

This holds two measures. The ability to contribute outside the ‘efforts’ of your official lead-gen team will for sure set you apart. Yet it is the other instance I’ll pop under the microscope today.

Crippling at interview time, this is where the promise of a bulging little black book of contacts sways both the inexperienced and eternal optimist recruiter.

I have encountered this far too many occasions. Blogging before on it a couple of years ago.

The lesson is clear.

Whenever a prospective new sales hire claims their overflowing rolodex of ultra-loyal contacts will be music to your target-stressed ears, remember to dismiss the urge to buy.

There is such a long list of reasons why the promised land never materialises.

Chief among them is the inability to unravel links between the two former buyer-vendor operations despite how strong your own personal relationship might feel.

I have even seen a new rep devastated when a buyer from his previous life had to turn him down in his new. Especially fraught as he’d even welcomed said buyer to his wedding.

This phenomenon is also why I so hate milkrounders.

Those reps that switch from one firm to another within a sector until they’ve done the full circuit.

Never go anywhere near these.

Imagine how refreshing it would be to hear from a candidate that they were intent on creating their own ‘database’ afresh, rather than lazily lean on one they already claim.