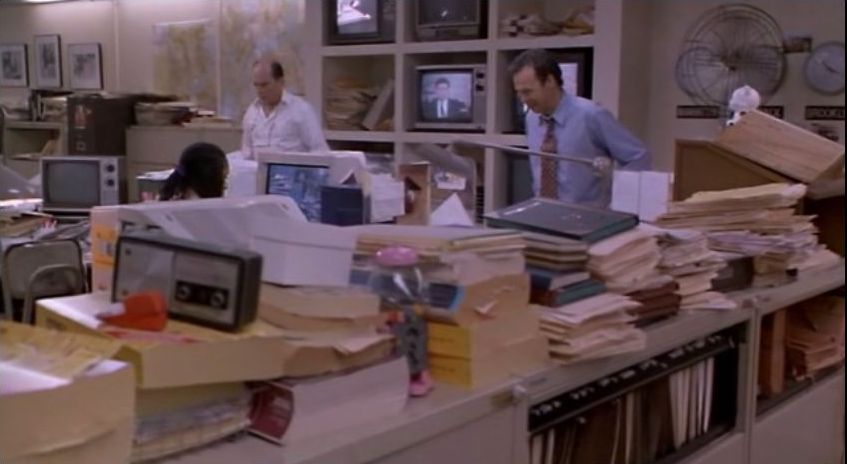 I caught Ron Howard’s 1994 movie The Paper the other night. The attention to detail for the set of a New York newsroom is fantastic. About half-way through, there’s a scene tucked away in one corner of the huge open-plan office, featuring Robert Duvall and Micheal Keaton, just after a row with Glenn Close.

The top-right corner of my above screenshot really took me. Here’s a subsequent camera angle: 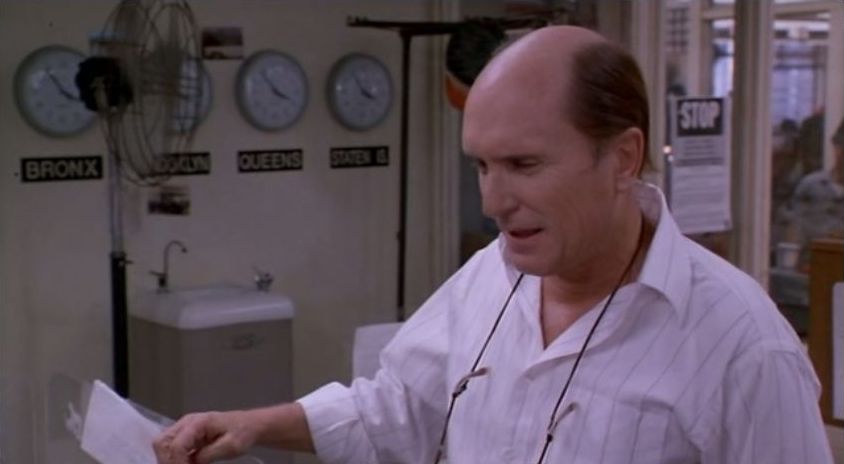 Most people love to pretty much boast of their global coverage this way, don’t they.

I instantly loved that there were no oh so typical New York London Paris Hong Kong Tokyo five clocks on the wall – to look supposedly impressive – that so often appear on self-indulgent corporate walls.

In their place there were indeed five clocks. Yet each had exactly the same time. And each represented one of the famous five boroughs of the newspaper’s home city. Here’s a close-up of four of them, hiding behind a fan.

Later in the film, Michael Keaton goes for a job with a ‘posher’ paper, and when their bigwig belittles him for not looking out to the world, Keaton responds with a glorious piece of expletive laden love for his own Big Apple myopia and disdain for the condescension.

I found that you can buy small clocks in a similar style at Poundland.

So for just a fiver (only eight dollars/euro) and a neat bit of printing labels you could make a terrific statement for your own wall in the very same way.

For Manhattan Bronx Brooklyn Queens Staten Island, you could easy swap in a few hyper-local placenames, even down to addresses, or better still the names of your prospects/customers, to show your laser focus on your local market.

At any rate, it’s a cheeky little bring-back-down-to-earth marker to remember that your customers are not always as interested in your global ambitions as you.