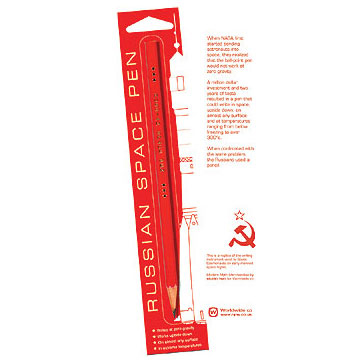 Here’s something I was reminded of when recently catching a glimpse of the first lunar landing for forty years.

You probably know of this space program urban legend;

What do you do when you need a pen to jot things down in space? Well, NASA spent an amount equivalent to the annual output of a medium-sized African country on this sticky issue. Zero gravity, everything ‘upside down’, weightlessness, extreme cold, extreme heat, the unpredictability of different surfaces. There were plenty of hurdles to overcome. And then, eureka, after several tries and millions of dollars, they had their miracle ‘space pen’.

And the Russians. What did they do? How did they solve this knotty problem?

They used a pencil.

There’s supposedly an anecdote from a Paris Air Show. Cosmonaut Alexei Leonov, in 1965 the first person to conduct a spacewalk and as accomplished artist made sketches in orbit featuring an abstract sunset, scoffed when shown the space pen by an American, mentioning their pencil. (There’s even this wikipedia page on writing in space.)

I remember many years ago when I first saw the above pictured pencils on sale. I think it was in the Gadget Shop, just off Piccadilly Circus. You couldn’t help but chuckle.

There’s even an anecdote suggesting the Soviets were smug about this.  He apparently scoffed with

There is an obvious parallel when selling new wares in our solution environment.

Is your glossy new product a space pen, when the prospect is perfectly happy that they can get by with the pencil they already own?

It’s a tough sell when you have something out the blocks and a significantly cheaper existing alternative can claim to cover a high proportion of your ground. Tough, but not impossible. There should be a reason for your price premium. And there could be a compelling case for whatever your ‘extra’ new-ness unleashes.

In addition, many new product launches fail to garner salesforce traction in part because the salesteam themselves view the initiative more as a space pen.

Especially when they were so comfortable selling their trusty old pencil.

Making the clear distinction can make a world of difference.

After all, you may still be offering pencils, but now with added different colours, rubber (no sniggering, Americans), sharpener, ruler, compass, protractor, plain paper, tracing paper, pencil case, desk, artist, draftsman, … you get my drift. 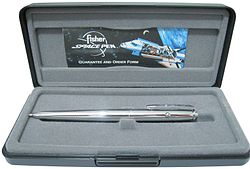 Remember also as an interesting footnote, the converse could equally apply. You have the pencil, when you’re unscrupulous competition wield the space pen….