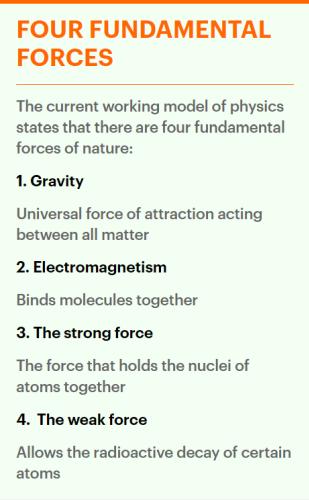 What forces are at play in your Sales universe?

Apparently, for the past fifty years, physicists have used The Standard Model to explain the laws of nature.

These give us the above fundamental four forces.

Yet now we may have discovered a fifth.

The most miniscule of particles called muons have been observed to mysteriously wobble.

It could herald an incredible leap.

Could similar be said of our bid environment?

Is this a framework offering a decent, different prism through which to shine our potential business through?

And addition to process pursuit?

Which forces pull the decisions we seek?

With plenty of other candidates aside.

Can you now add a new one to the mix?

And naturally, you could turn this towards your prospect universe.

Have they four longstanding forces?

Is gravity the mission that is core to everything they do?

Electromagnetism from the ties that bind them?

A strong force seen in how they work together?

A weak force felt from how they work with suppliers, partners and anyone else externally with whom they interact?

To which you can now add a fifth.

Tellingly, one which you uniquely repel or unleash…

Giving you an extra lens to apply across all deals on your forecast too.