Who’s out of a job this morning?

Is it perhaps Craig Federighi? Apple’s bumbling (Senior VP) Software Engineering bigwig? Or whoever promised him his money shot would work like a dream on the big launch demo?

If you haven’t seen the twenty second car crash in its full glory and all the clips have been mysteriously shut down by an illuminati, then here’s the transcript.

He’s trailblazing the supposed leap that is their facial recognition security, FaceID. By way of a live demo at their brand spanking new purpose built $5billion “space ship” head office. Craig’s mug and a phone are soon to be conjoined. What could possibly go wrong?

Now unlocking it is as easy as looking at it and swiping up.

[the iphone does not unlock]

And get right in.

The mildest assessment deemed this “rocky patch” a mere “hiccup” and “embarrassing glitch”. As you likely know by now, decency prevents me from any reprint of just about every other description that profanely exclaimed itself open-mouthing WTFed around the world.

Pretty much everything I’ve ever been involved in selling has required a demo. And if it didn’t, I created one.

But wait. Craig had a back-up plan. An extra phone was at his lectern. Ready for just such a hitch. And turn to it he did.

Any sales outfit that demos anything – not just tech – must download this clip and show it at your next meet-up. You ought know what could go wrong. And what to do when it does. If such an #epicfail can happen to the world’s first ever trillion-dollar corporation, it can (and will) happen to you.

UPDATE – next day – You cringe at their PR machine attempt to shine a different light on the fail. As reported first by yahoo, they claimed ‘the phone didn’t make an error – the company’s staff did’. A demo fail is a demo fail. And no amount of overpaid post-match spin can make it right. Especially when the back-up plan failed to realise the lack of difference between backstage colleagues and ornery children who sniff biscuits. Let’s try that again. If celebrated cartoonist Matt’s slant at the time was anything to go by, might more sinister forces be at work… 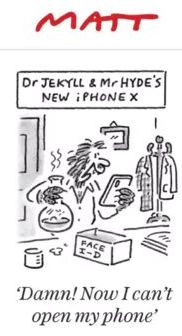 …as a footnote, perhaps I can leave you with one of the most remarkable demos captured on film. From a London hawker on a New York street-corner. A humble veg peeler. His story was amazing. Look and learn from Joe Ades;