The embers of 2021 brought with them the revelation – direct from Chair, Prof Graham Medley no less –  that the supposed scientists tasked with advising the UK government with how the coronavirus would spread were only interested in the worst-case scenario.

What is also remarkable, is how their infection, hospitalisation and death rate projections failed to alter. Even in the face of overwhelming evidence that their doomsday predictions were not just false, but way too gloomy.

At time of blogging, here’s their latest pair of policy-bound future numbers. 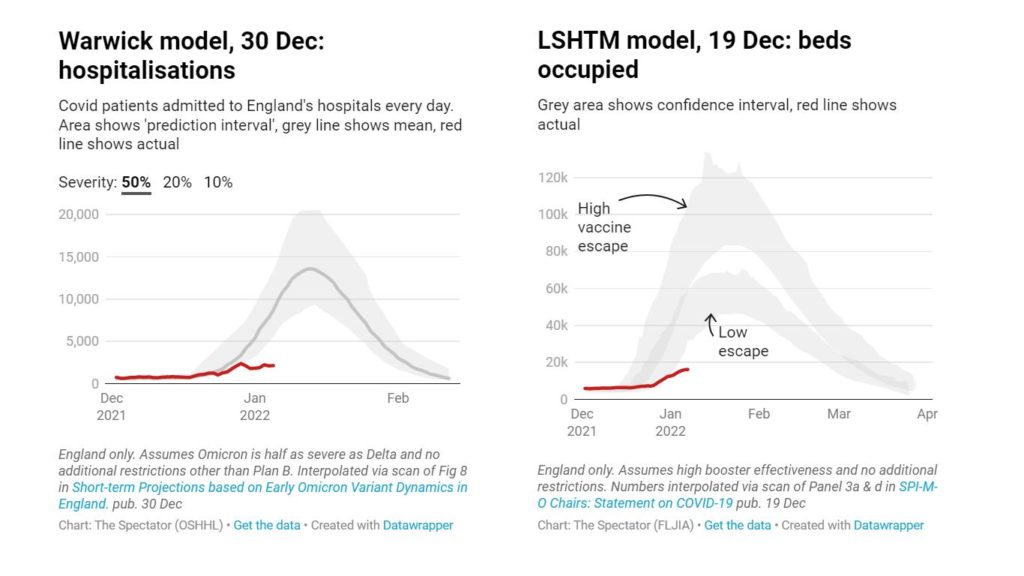 When clicking through, it takes the least likely, bottom-of-range expectations – at the staggering 10 percent level for the left-hand side ‘Warwick’ guesses – to get anywhere close to reality.

As I blog, “daily deaths remain relatively stable, at less than a sixth of the figure projected by some Sage modelling”.

The first is clearly how a mindset of negativity can colonise otherwise sane minds.

There’s gall of so-called experts who despite a devastating trail of crying wolf, continue to be given blanket airtime far outweighing the competence of their previous suggestions.

Such reward for constant failure applies to the now unchallengeable superbrain, quasi-celebrity, self-styled rockstar scientists, who continue to preach the hardest of measures without any substantiated evidence.

It even skews the highest levels of policy makers. Unbelievably, the country’s chief scientist, with a straight face, claimed before Christmas that, “everything we know about Omicron is bad”. An utter dereliction of duty and wholly, demonstrably, scandalously incorrect.

The point is, that sensitivity analysis – the looking at potentials by way of ranges rather than absolutes – was a best-practice completely ignored by those who should know better.

In England, we are lucky enough politicians that matter staged their own revolt. Preventing unnecessary shackles debilitating much of the world, including, shockingly, the other Home Nations.

The learning clearly for sales forecasting is to move away from definitive figures. Think instead in terms of upper and lower bandings. From which both respect from those counting our beans and refinement can genuinely grow.

Which leads into our second point.

Any forecasting routine must factor in how our guesses may get better over time.

This also introduces the sadly missing lever for the lockdownmongers of accountability.

To track how out previous estimations were is to get a handle son how they may be improved for tomorrow.

Who is doing that for you?

I feel compelled to report that – among both Sales Ops & Sales Leadership – these are conversations so seldom had that they might as well not ever exist.

When you link deal likelihood to elements of your true process, the propulsion for your results really can be, to use a phrase, warp speed.

Hopefully you can build on this power for yourselves.