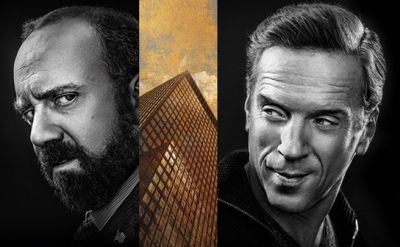 Considering selling is a core tenet of hedge trading, there’s remarkably little of it on show in this latest telly bingefest.

Half-way through Season One, I see political machinations, persuasion ranging from the heartfelt to the ruthless and countless blindsiding one-upmanships, yes. Sales? Not so.

The Billionaire himself, Bobby ‘Axe’ Axelrod clearly believes information is power. His tenticular ears are everywhere.

More intriguing than his web of informants, he likes to tell stories based on his childhood. What happened whilst growing up – from being sacked (needlessly) as a golf caddy to loving food that still tastes the same great way today (a treat snack getting shamefully sweeter versus pizza which keeps to the trad methods). He loves to deliver messages through personal meaning.

Finally, and perhaps most important of all, he has genuine and infectious enthusiasm for what he does. There’s a scene where reunited with his first big client his face “lit up” talking about trades. To the benefit of the client. You cannot fake passion. Never tell someone you have it. Let them simply bathe in yours as it shines forth.

Then there’s his foe. US Attorney Chuck Rhoades has his own tough ‘sell’. He must keep his entire office working on the cases he wants. When the choice is bewilderingly huge. He sells using stories for analogies too. I particularly liked his Butch Cassidy & The Sundance Kid “riderless horse” persuasion speech. (Don’t get distracted by the cheeky ploy of your opponent sending you the wrong way).

Yet one tactic he uses a lot is the famed ‘making the impersonal personal’. For instance when faced with the prospect of reducing years in prison, rather than hammer home the numbers of incarcerated years, he instead says things like, “and you’ll get to see your daughter graduate from college”.

Thirdly, their link. Chuck’s wife is the key confidant for Axe.

She’s his firm’s official psychologist. A performance coach note. Her key manoeuvre is relentless. To use everything she knows about someone to firmly hook their personal values onto the direction of travel they must take.

This is worth stating in our terms. Like when you’ve a key prospect personality that wants to be seen as a qualified risk-taker, cost-slasher, visionary, strapped to the strategy. Whatever. You make your bid cement to their inner core.