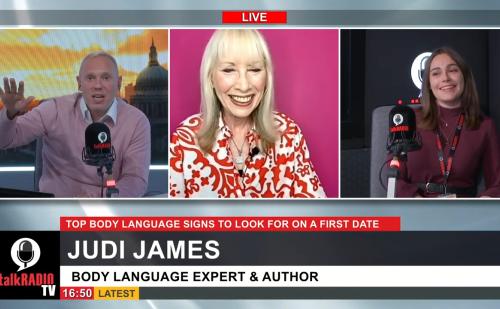 This particular appearance delves into the physical cues on a first date that can save you heartache.

What followed were her top three expressions that reveal someone is genuinely interested.

These perked my interest in part, because of lasting memory from one of my first ever training days (given by HP) long ago. During an exploration phase run-through, I noticeably leaned forward towards the role-playing instructor. They loved it. Whilst a natural reaction, it was a point not lost on me that when ‘selling’ you can be attentive without feigned sycophancy.

First up, the eyebrow flash. A blink-and-you-miss it raising of both eyebrows. An affirmatory gesture. Away from the dating game, this could signify impressed agreement if used sparingly.

Next, exclusivity signals. Such as the one I discovered all those years back, like the lean in. On a video call, people rarely move right up to their screen. Yet it feels a winner. Perhaps only if done once or twice, but when you do it’ll surely give emphasis to your concurrence on that particular point and the person articulating it.

Thirdly, the eye lick. Where their eyes go from your eyes to mouth back to eyes. Maybe the trickiest to attempt a flavour of on-screen. Yet consider that to look away, having a quick reflection on what’s said (hand on chin, even), then turn back to the speaker can favour you well. A further pleasantry being that you avoid being visibly robotically fixated on the screen.

As with all this, apparently subtly is the key word to remember. Otherwise they can be aggressive.

Body language is a forgotten and under-utilised element of video meetings.

Without going over the top, a mere handful of techniques can elevate your success on a video call.

Anything that helps the visual element of the virtual help rather than hinder is always well worth a try.