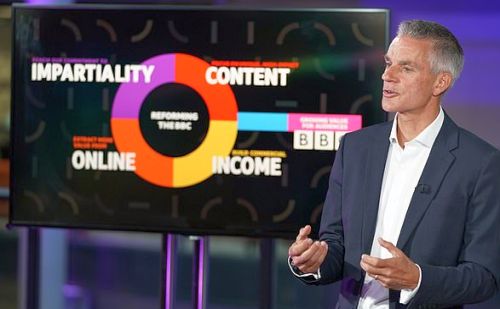 This appears to be the sanctioned, released graphic from the new man at the helm of a media dinosaur. For his first speech as leader. Addressing the impossible job of maintaining the status quo for a national tax-funded broadcaster. May they soon perish and allow fresh and just talent to flourish.

A donut, of four equal parts. With – using locksmith terminology – a ‘shank’ protrusion from the ‘bow’ and a logo for the nose/bit effect.

The key to the future.

When I first saw this image, I thought it utter pants.

Too many colours, meaningless quadrants, word-salad labels, text too small, logo out of place, why two colours for the shank/pin, background bizarrely filled with a pattern of random arcs and lines, central message woefully low impact and not the single label ‘REFORM‘ (which might have been better as something akin to ‘SURVIVAL‘).

Which is a kind of graphic shame. For although the organisation’s demise is hopefully approaching in short order, there is maybe something in evoking the humble ‘key’ as your anchoring imagery.

It fits neatly into a landscape container. It has all manner of useful unlocking analogies. And you must find the right lock for it to open your door (or anything else that can bring progress, treasures or light closer).

I realise a donut is never the first choice of the seasoned presenting pro, Yet here you can apply weightings to your pillars – preferably between two and say five – and have a label writ large in the middle (in the space within the bow where any key ring goes).

The blade can evoke some kind of movement or action. The very end of which – also called I believe the ‘pin’ – is where an old school mortice lock key parts come, the ‘levers’. Here, there are like three equal length ones of the BBC logo blocks. Having this as some kind of mini-barchart may also work a neat trick. Show the end-game somehow. You could even have just two prongs. One representing the ‘now’ number, the other the future aim amount.

Simple to replicate in slideware and might well just get your audience remembering the foundations upon which you propose success.