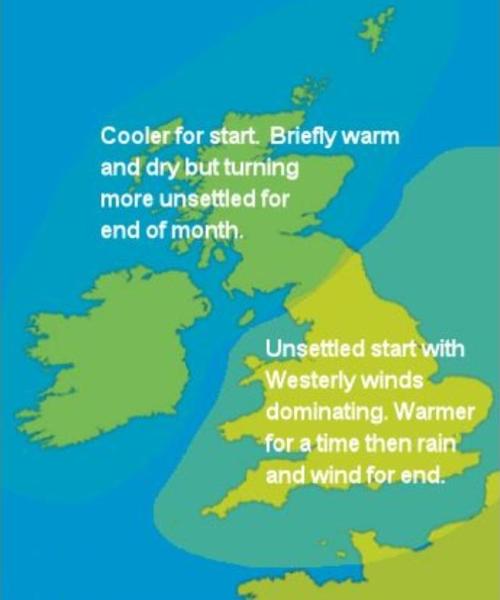 That was the headline from longer-range weather forecaster, Metcheck.

As seen from their ‘next month‘ page when August 2021 was imminent.

Here was the accompanying text to the map above. Part of their outlook for the month ahead, delivered the week prior;

“A rather disappointing August is expected this year with a cooler than average start and the Atlantic dominating the weather. Turning briefly warm or very warm for a time and increasing risk of thunderstorms.

For the second half of the month we expect the Atlantic to continue to dominate the weather with cooler and unsettled weather across much of the UK but high pressure could hang on across Southern areas for a while longer.”

As August duly begins, the latest weather story blanketing the country’s media rather has this as its banner text;

“African Plume to bring back heatwave in a fortnight”.

You could hardly read a pair of more contrasting predictions.

I then went back to see what the first rune readers made of July beforehand.

Similarly off the pace. The one possibly correct guess (“much warmer temperatures” mid-month) countered by vague and largely inaccurate estimates for the month’s bookends.

The record highs in N Ireland for instance, were specifically not part of their forecast. Floods around London – worse than predictions – did occur towards the end, but hardly anywhere else beyond the S East. And who knew there was a European June Monsoon season? This caused havoc in Germany and the Low Countries, but stayed swirling there, away from these shores.

No mention either of the fact that many observers later told us the often disobedient Jet Stream had strangely split. Resulting in continental climate chaos.

I was reminded straight away of nowcasting [see my blogs from 2020 & 2014]. Especially as sent up by Tracy Ullman’s App Guy. As well as the danger of averages. Such as the Hans Rosling classic; ‘nobody has 1.999 legs‘.

Forecasting is important in solution environments for many reasons. Prominent among them, the need to snugly allocate finite delivery resource.

But for the individual salesperson, it is also a much neglected terrific tool for improving our hit rates.

I bang on about this a lot.

The single biggest impact upon a sales endeavour is the strive to determine what your ideal process is. The one which brings sustainable and repeatable won deals.

This formula – well, you can think more in terms of a pattern, really – builds on the actions that when taken place, mean you invariably (overwhelmingly) succeed.

This tweak in mindset can represent a wholesale about-turn. Which makes its chance of uptake slim in several places.

Yet is a game-changer.

If you don’t attempt it, you’ll be dooming yourself to the fluctuations seen in the error strewn weather prognostications above. Neither can be right here. Yet you can. Will you be…?