The British Left is in disarray after an unexpected Election pummelling.

So much so that they appear bizarrely close to choosing a Stalinist as their next leader.

Comedian Mark Steel evoked the speech style of long ago incumbent Tony Blair to suggest what the Party required. 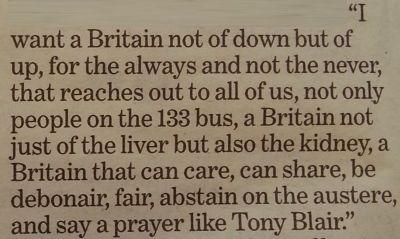 Then London’s Times passed comment by quoting from the man himself on the leadership hustings.

As a pitch device, this has long legs of frenetic cadence.

Easily lending itself to comic deployment, being able to position yourself through a listing of opposing poles is also a winner in the more sombre corporate setting.

Providing you don’t fall off the satirical cliff, it can be useful to think of such binary options. Where one you are slap bang on. Whilst its mirror is not ‘you’. Especially when that other ‘twin’ is undesirable for your prospect and smacks more of any competition, you’re on to something good.