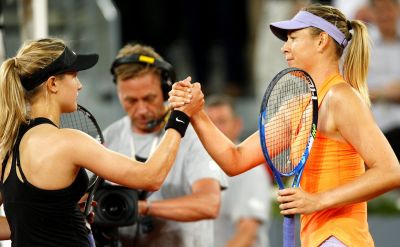 I had the unusual pleasure of watching a women’s tennis tournament second round contest in full this week. All three hours of a captivating Monday-night thriller.

Madrid’s clay court battle was hyped up as the opponents had engaged in well publicised public spats. Sharapova v Bouchard on paper was not one for the Canadian. On a rotten streak this year herself, she’d failed to ever beat the Russian who was returning after a doping violation enforced absence. The infamous Court of Arbitration for Sport suggesting it was a punishable misunderstanding over a prescription medicine, the rest of the sport supposedly smelling a drug-cheat rat.

Against the odds, Eugenie prevailed. She never looked likely to cross the line until the final point had been won. But this sales angle is not about her. Nor Maria.

It hails from Sven Groeneveld and Thomas Högstedt.

For these pair are the current coaches of the athletes.

An innovation these past two seasons at this level of events on the women’s tour is for the coach to be able to speak to their player.

It is not one I admire. The men’s game are against it because they wish to keep the gladiatorial, man-o-man element intact. Problem solving on court yourself.

In this case, the coach runs on during the inter-game changeover, mic’d-up, and delivers their “wisdom”. On screen the viewer sees and hears the entire exchange. Except it is never a conversation. In every case the coach drops a monologue. And it is in this speech a telling sales coaching lesson emerged.

Sven’s whole demeanour was fairly aggressive. Crouched down, his instruction to Sharapova felt like a roasting. And his recommendations were several and scattered about.

Thomas on the other hand, was far more restrained. Gentler. Encouraging. Clear and concise. In the critical rest before Bouchard served for the match, he gave two quick steers on where to place serves, reminded his charge that if her opponent played a good point to put it behind her and move on to the next, all the while telling her how “great” she was doing.

The contrast was stark.

And look who pulled through.

Encouraging, not roasting. Regardless of whether you think someone responds better to a kick up the backside rather than arm round the shoulders, there’s usually only one way.

Clear not scattered. Too many ideas always distract whereas the simple, preferably singular message when repeated gains results.

Just like on this day for the winning underdog.