Neon 80s synths rebooted for the 2020s. How can you not take notice? Well, the google certainly couldn’t. As for some reason it algorithmed this pop song through my screens.

I knew of Chlöe Howl from her theme tune acoustic rendition almost a decade back on an English telly series. Despite mainstream backing she’s sadly not quite broken through, as they say.

Maybe this track will change her fortunes.

I was also smitten by the primary effect chosen for the accompanying video.

The vertical fluorescent tube lighting arrangement deployed throughout as blue to red feature screamed one thing at me; barchart! 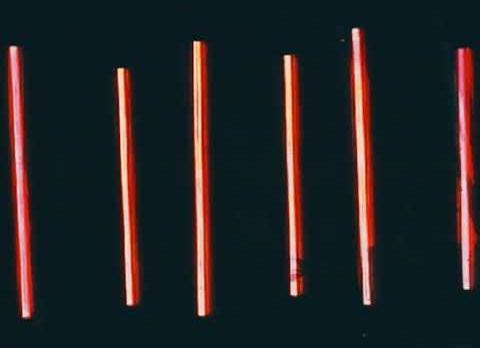 Aesthetically, I think I prefer the blue. Although it does occur that if you were to use this as a graphical template, red could indicate ‘hot’, as in figures on the rise, with blue, ‘cold’, where they may drop.

The central-justify styling here reminiscent of the geometric abstraction art of Alain Biltereyst. I’ve referred to these in the past as ‘floating bars’. For ideas in this vein and much more, see my book, 101 Charts That Sell. I’ve used such technique adding direction signifiers too.

If you’ve a palette familiar to your audience that lends itself to being placed on dark background, then why not try this neon strip lighting effect?

Below you can swipe through for a trio of examples using the above toned reds sample.

Can you too neonise your data?

As the Brazilian-born, Belfast-based musician says himself, “New Order meets Lady Gaga at a dinner party with Van Halen”.

Dust off your dancing shoes and dim the lights because the video for #WeWereYoung ft. @chloehowl is out now 📼💙 put this on the big screen if you want to feel like you're in an 80s disco 🕺https://t.co/iGEOqHgJoi pic.twitter.com/obrTzQCTfq