My blog title as motto for the winning sales community. Translating from the French; we are trustworthy.

Unlike, so it transpires, French President Emmanuel Macron.

Up to his anybody-to-blame-but-himself (always happy to add a big dollop of anti-Britain bashing) tricks again.

This time, with this shockingly disingenuous status report on the coronavirus vaccine rollout in France.

You know the one. Where they ignored the multi-track approach of neighbours – most notably the amazing private-sector expertise led, British purchase programme – and bet the house on French lab development. When that failed, they compounded the error with even more jingoism. Their President spread totally baseless fearmongering about the jab made by an Anglo-Swedish pharma giant in Oxford. The result? Tens of thousands of needless deaths. Nous sommes la France, indeed.

There’s a number of elements we must leave to one side when it comes to government reporting of covid-related stats. How the total number jabbed exceeds herd immunity levels, no matter how many times this goalpost gets moved by “the science”. The extent to which a second dose may or may not be necessary to quash the contagion. The fact that swift rollout to the most vulnerable undeniably broke the link between infection and grave illness, and made the biggest dent in hospitalisations and so deaths. (In my English region for instance, those receiving both shots as I blog sits at over 90%, with one jab reaching an incredible 94%). Even the remarkable drop-off in uptake among the young, amplified by cultural effects, has a data influence.

Yet let’s examine this multiple linegraph published by a London newspaper; 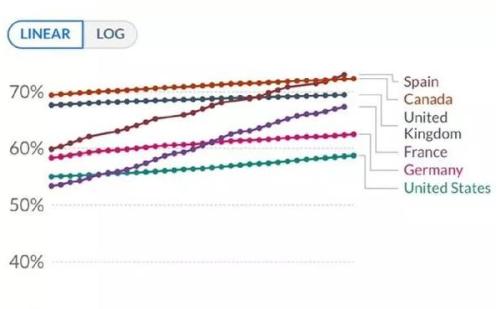 Quite the riposte to Macron, hey.

Whither Spain, Canada and the UK?

France is undeniably not top dog.

In the Spanish and British case, it seems these double-dose lines slope (accelerate) more due to perhaps deploying a different delivery strategy. The famous 12-week interval as cleverly hit upon through English Birmingham University study of first-dose efficacy.

What we have is a clear case of obfuscation. Misdirection through omission. We have a word for that, don’t we, Manu?

Sadly such malaise is not restricted to the French. The UK government scientists shamelessly did the same thing. Albeit in different clothing. When they zoomed in to magnify a short time period to show a recorded infections uptick prior the original Freedom Day planned. Only for the longer duration graph to show that horror for what it really was; a small blip up. Which happened to be temporary.

The selling conclusion is simple. If you present data that is ‘dodgy’ – from whatever angle – someone, somewhere prospectside will notice it. You’ll then get called out on it. And the sale will be lost.

So let’s not do a Macron.