What a disaster. Afghanistan gone to pot. The world a way more dangerous place. Countless more needless lives will be lost and millions enslaved or suffer devastation at the hands of oppressive murderous cowards.

Many people are to blame. Yet the chief culprit now the music has suddenly stopped is pictured above. As tweeted from his official account. The bomb drops on his watch. Let’s hope he can muster remedy, and quick. For all our sakes.

The humiliation of The West and abject failure of liberal democracies worldwide aside, from an everyday selling perspective, aren’t we glad we live in a society where legitimate debate such as emitting from the above inner workings glimpse of our elected politicians is in daily supply.

The following day we were fed an update;

This morning, the President and Vice President met with their national security team and senior officials to hear updates on the draw down of our civilian personnel in Afghanistan, evacuations of SIV applicants and other Afghan allies, and the ongoing security situation in Kabul. pic.twitter.com/U7IpK3Hyj8

The American President’s venue is his official residence of retreat, Camp David.

That’s quite some table to hold meetings around. Peripheral ‘room meat’ spots out of view. It seems to have seventeen berths. Although only eleven face the screen. And how many of them could actually get a proper view of it anyway? Even the HiPPO (that’s Biden here) doesn’t get a great sight either.

Which brings us to the first learning from this set-up.

He sits too far from the screen for the meeting to become anything other than a phone call with thumbnail pics.

Although large, its size renders anything done – particularly by those dialling in from hybrid positions, ie, sharing the same screen space – basically audio-only. Maybe not quite so much in the four-way configuration for soloists, but certainly with the nine-slot gallery view. Noticing as well how that bottom-left cell is split in two.

If anyone of them, especially those co-locating, share a graphic physically held up their side, it probably won’t have the punch required.

Biden does not appear to have a decent second screen of useful dimension to hand. The old-PDA style gizmo in front of him wouldn’t suffice. Compounding that, what looks like a laptop is closed. Something like a tablet, from which to see anything sent through for the closer examination any such imagery would merit, would better suit.

There is the chance for full screen takeover and prepared visual share by those not ‘hosting’. Even if done via the meeting administrator. But then you’re perhaps in the realms of fate.

This should be taken note of. As it feels like the immediate future. Hybrid meetings. Also termed Blended working. Where some attendees sit together, in-person, appearing on a single screen. Others join on their own from other locations.

I wonder if some kind of easel or stand can be effectively fashioned that allows for those sharing the same physical space to walk up to the lens and place a visual right in front of it. For a short duration maybe, but if in-focus nicely, then it could be a winning vibe.

This does appear to be the kind of forum where vital intel like maps and data would need to be shared real-time. How was this done? How will you do it in your blended sessions? A combination of doc shares and collab spaces open will only get you halfway there.

A further point is that hybrid video calls have been around long before the pandemic. Those that deployed them regularly as routine will tell you that you should never have two people share a feed. The rule for business effectiveness very much ‘one person, one screen’.

Civil servants might argue that reduces impact in this case a touch. After all, in this instance the three slots of the two-by-two would seemingly become a filled matrix of nine might still be useful. Yet expanding the three-by-three for each participant to encompass what looks like eighteen shrunken cells could stifle results.

But let’s be accurate here. Any business meeting – as opposed to conference or all-hands type information dump – with eighteen participants IRL is rare. Let alone over video. And there’s a good reason for that. They don’t work.

But hybrid is coming. If not already here in your world. So get ready. Luckily you can now start doing so by avoiding the slips of POTUS this week. 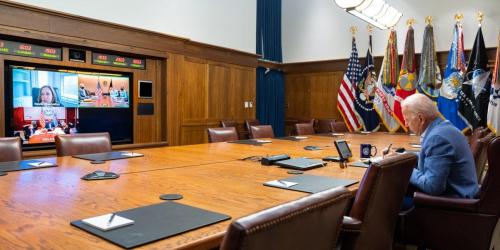