Rotten Tomatoes hammers the film. “Clichéd and unoriginal, Paranoia is a middling techno-thriller with indifferent performances and a shortage of thrills.” I did not share this view.

The flick has the added bonus of showing two critical presentations.

The first gets the movie started. The developer is team leader hoping that the chief exec marvels at his latest product idea. 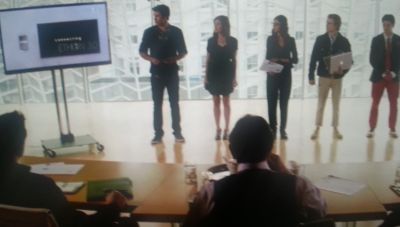 Pitcher: Good morning [said as strolling into the room, greeted with indifferent silence, Big Boss merrily pouring tea]. We’re all in the business of connecting people.

Pitcher: [trying to compose himself and regain ‘lost’ audience] We’re in the business of connecting people.

Big Boss: [still not looking up] You’ve already said that.

Pitcher: Right. And that’s what our customers have always wanted. To stay connected. Those same customers are now texting when they should be talking. [Big Boss puts his phone on the table as he realised he was then texting] Tweeting when they should be meeting. So what’s changed? What are we missing? We don’t want to be connected anymore. We just want to feel connected while we isolate. So, what if – a 4 inch mobile had a 60 inch screen?

Big Boss: Well then it wouldn’t be mobile [assessment acolytes snigger along].

Pitcher: With a voice activated pairing device, [product name] will allow users to broadcast across any device [demo of product occurs from pitcher’s phone onto adjacent big flatscreen monitor] It gives you the power to bring your world to you.

Big Boss: [whispering dismissively to his group] Is he pitching me software?

Pitcher: So we see a unique opportunity. This is a rebranding maybe.

Pitcher: Sir, I believe this disconnect is between you and the consumers. I mean you didn’t hire us to sit around and watch you make tea, did you?

Big Boss: [taps table in menacing manner] Tell me why did I hire you?

Pitcher: Because we know what the younger generation wants.

Big Boss: Which is?

Big Boss: You’re know you’re right I have lost touch with your generation. What’s your name again? [Pitcher responds] How old are you? [‘27’] When I was two years younger than you are now I was pioneering digital cellular technology. While my colleagues were still pissing around with electronic pulses. But you have all the technological advantage imaginable and what do you bring me? Social networking on a television. Next!

After they trundle out the room, we see them walk from the building, possessions in small boxes, out of a job. As one ruefully sums up:

That’s what happens when your team leader goes rogue and starts arguing with god.

Our wannabe digital superstar Pitcher rather unnervingly soon finds himself in another pitch. At his previous firm’s big rival.

This time, he’s punting not simply the wonder to finding locations that is GPS, but a 3D upgrade of it.

He makes a much better stab at this presentation. And gets the green light.

The reasons for his switch of fortunes are many.

They include involving his audience from the start (he sent a prep email which allowed activation of the capability for each attendee once he’d started). An easy to follow live example of an application (eliminating friendly fire deaths by the military). A way swankier demo (and one in which the audience could see themselves on the big screen).

Later on, the initial Big Boss remarks that the first presentation was actually rather good. You’re probably led to believe he was fibbing. As the plot then required him to ‘make nice’ a little with the Pitcher.

There were some nice touches, but the overall delivery was weak.

The problem being solved wasn’t brought out enough. And in its verbalised form is nowhere near strong enough.

The language has some neat touches too. The rhyming is always a winner;

Those same customers are now texting when they should be talking.

Tweeting when they should be meeting.

Even if the problem wasn’t strikingly enough defined. Something you have to be brutal with yourself about in your own pitches. 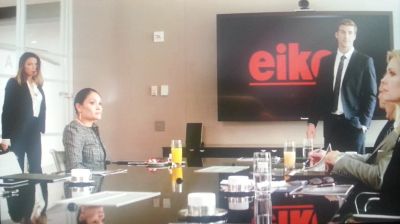 And could you too benefit from showing live, client-real data? It was missing from the first. So the demo lacked any sparkle at all. It was present in the second. And the ‘wow factor’ followed.