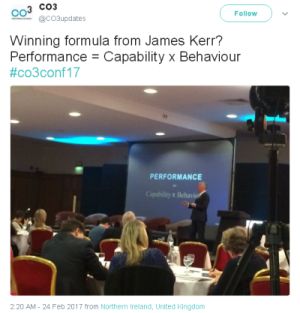 What a Series from the Land of the Long White Cloud.

Rugby – sport – at its compelling best.

In the aftermath of the strangely anticlimactic – and now perhaps never to be repeated – shared spoils, many words are spilled of vincible double world champions and Legend Lions.

Yet the thwarted New Zealanders have, for all but a two-decade blip around the dawn of (transition to) global professionalism, played a different game to the rest.

Yes, there’s thievery of nearby island schoolyard talent, the blatant breakdown transgressions that somehow stay largely unchecked and the disgrace to world sport that is the pre-kick-off haka. But there’s also the permanent fearlessness of their forwards, scintillating backs, incredible handling, ferocious momentum and breathtaking speed that all often goes completely unmatched.

I was intrigued to read how their mental skills coach (“stretch” rather than ‘shrink’), Gilbert Enoka, approaches life as captured by Legacy author, James Kerr, pictured above at a Northern Irish charity leaders conference.

And how his way of speaking permeates throughout the Kiwi players.

When interviewed they talk of their walk towards pressure and the wish to express themselves.

(As an aside in such regard, it was interesting to note Lions skipper Sam Warburton quote from an American basketballer, Michael Johnson; “pressure is the shadow of a great opportunity”.)

A couple of years ago I happened across a coaching framework known as P=p-i.

This team appear to heed a different take on this;

Pieces on this abound around the web; 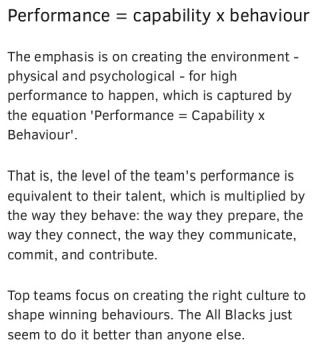 Everyone has a degree of ‘talent’. What ‘behaviour’ brings this out to farther where it would otherwise go?

I suspect many a salesteam around the rugby playing world and beyond will be rightly discussing this at length this week to lay down the deep cultural foundations that support the heights to which they aspire. Is yours one of them?