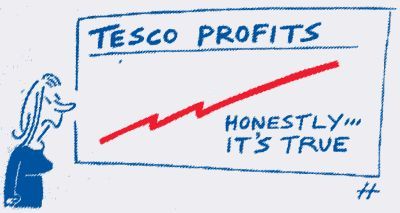 Tesco. The UK supermarket behemoth. Twenty years of growth spurred on by the drive to surmount established players atop the country’s grocery summit. Then disaster. Fuelled by the hubris of first McLaurin, then Leahy. Marketing number crunchers with seemingly no actual empathy with the paying public.

Many commentators are calling the current regime out this week. In the light of yet more floundering figures.

The Times noted that the current marketer-turned-chief exec, Dave Lewis “is a fan of pat phrases and management-speak”. It is as utterly destructive for him as it is for our sales pitch.

If you feel yourself falling down these drains, then pull yourself out. Now.

The analysts’ ire follows two flanks. First, his insistence that he not only polish the unpolishable, but sprinkle it with glitter too. He claims he is “extremely pleased” and hails his “year of significant progress”. So much so, he caused their shares to crash by 8% when revealing his meagre pickings. Just £162m pretax profit on sales of £48.3bn.

There’s been quite the fall from record numbers in 2011. When supposedly every one in seven quid spent in Britain was at their tills. Now, they have a whopping £15.5 billion pile of debt.

Then there’s the vision thing.

Dave Lewis appears “guided by a clear purpose [of] serving shoppers a little better every day”. Well, as missions go it’s pretty meaningless. Deliberately indefinable? Whilst I’m a big fan of the ‘making small progress‘ meme, in his context it’s past its sell-by.

Sadly, his top UK colleague gets in on the act, “at Tesco the customer is always our absolute north star”.

It all comes across as job well done, almost there. Which they patently are not. As anyone forced to enter their dreary monotonous stores can tell you.

He could have done so much better. Especially given that some analysts appear on-side. One trumpeted he “deserves considerable credit for steering this near-shipwreck to calmer waters, where the groups ‘engineers’ can and are now making progress”. So why not build on that?

Lewis could ponder whether a little humility goes a long way. As this state of reality is absent from his rainbowed pronouncements.

They will likely continue to get nibbled by invigorated aspirants at their edges who laugh at their misguided all-things-to-all aisles.

Such delusion will sink your ambitions too. Don’t do a Tesco.

My frustration in hearing such remarks furthered as they came the day of a totally outrageous euro footie game. German coach (of whom I’ve blogged before) Jurgen Klopp’s post-match interviews after his team performed a miracle to go through (Liverpool 5-4 Dortmund) are surely the benchmark in honesty, hopes and refusing to spin. All while maintaining and growing all-round support; “Don’t ask me this $#!+ …”