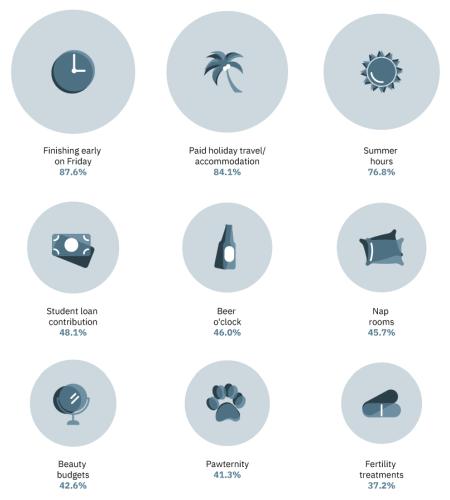 These types of pr attempts, as here by a firm whose trade relies on pushing perks and general benefit ‘management’, must typically be taken with a pinch of salt.

Considering it was from data supposedly gathered during the UK’s second national hard lockdown Autumn 2020, it is a startlingly unimaginative piece of self-promotion.

Their proportional area circle chat above depicts the nine most treasured perks at that time.

It kinda reminds me of the time I once had the temerity to suggest a touch of democracy in a class at school. The (brown-suited, brown tie and sandal-with-socks wearing) teacher took a vote. A majority of hands went up. He then asked for a second show of hands. ‘All those who want to go home early?’ Now not a single hand stayed down. I was and remain decidedly unimpressed.

I suppose in a sea of niceties, at least we might learn that POETS Day is the number one.

It did make me ponder on what exactly is a ‘perk’.

Anything that makes your toil more tolerable, a reward, or concession?

Where is the line between a wellbeing perk and productivity aiding expectation?

I note that none of the top-nine feature items such as the types of social corporate responsibility that have seen community initiatives taken root over the past decade. Nor the much vaunted ability to work on your own projects a slice of the time. And perhaps even more tellingly, there is nothing related to personal development.

Know of Wendy Rhoades, the in-house psychologist from tv hit Billions? A much sought-after ‘performance coach’, coming from the mindset angle. But rather than her mental health guidance, why not dedicated personal Sales development in your sales place?

Not the kinds of generalisation that HR or nowadays labelled Talent departments might offer. But genuine, sporting style one on one coaching for overall and specific career enhancing focus?

Salesteams have long had a ‘2 i/c’ (second-in-command). A right-hand person to the big boss tasked with all aspects of running the team that aren’t ‘managing’ it. The snags are traditionally (at least) sixfold:

They tend to get sidetracked more down the tech support route.

There can emerge a tricky political tension from perceived encroachment into the boss’s desired turf.

Resentment can build from them not carrying a measurable, accountable quota of their own.

The source of their credentials may not be easily understood nor accepted by more senior team members.

When such an individual is considered good, they tend to be pushed into a team management role, reducing or even eliminating their wider value.

Which also introduces the spectre of future career moves, as where on earth does anyone in such post go next, a couple of years down the line?

Many teams have tried in the past and jettisoned the idea due to unassignable impact.

A trusted sales trainer held such temporary position when I began my sales career. When landing for their half-yearly sessions, a slot would be made for a hot big bid piece of extra analysis and planning. The extra brainpower welcomed from an experienced and proven old hand.

Such arrangements could be more formalised and frequent.

As the Millennium dawned I again came into contact with one. Inside a rocketing tech startup. A Kiwi called Rex, double the age of almost all the Salesforce. I attended a New Product training session as observer. A discipline which was already becoming my forte. Yet events got embarrassing. Four twentysomething reps, the coach and myself. Yet the morning turned into an exercise in trying to impress the sole female in the room. My attempts to refocus were rebuffed. I asked her how she felt proceedings went after. I realised there was a serious cultural reset required there, which alas never came.

Despite such anecdotes, teams that manage to make this position work score big. So how do they crack it?

I’ve seen many different tricks down the years. From rotating holders, where upon territory redrawing a type of interim position allowed for people to have an eighteen month ‘secondment’ in such role. To maternity leave returnees taking part-time reins.

My experience is that sales knowledge management is the one area most overlooked.

Getting something that works anywhere around the team into the heads of the rest.

After that, I find that certain ‘micro-skills’ are inexcusably ignored.

Not only in their performance, but also on-going cultivation.

Whether it be from whiteboarding a pitch, handling an objection or even some element of timing, precious little formalised charting out by individual of what and how these and their ilk are nudged ever better can exist in even the most big-ticket of selling operations.

Imagine a salesteam where you can state which percentage improved their abilities in specific areas.

That may well be soon seen as a perk. Despite its possible best-practice position as a day-to-day expectation.

Forget ‘games won’, ‘goals scored’ or ‘assists’, as in football of yore.

In similar fashion, whilst performance against quota remains top of the tree, a myriad of other levers come into Sales play. To truly succeed, we ought focus on these properly too.