I read with interest a recent magazine article reappraising goal setting. Here’s a summary sentence for the gist.

The paper referenced has the delicious full title, Goals Gone Wild: The systematic side effects of over-prescribing goal setting.

A main argument seems to be that period based targets, whether by month, quarter or year, can prevent sustainable performance and growth. Short-term pressures erode long-term integrity. Here’s their noted downsides.

Doesn’t sound too desirable, even without the damage caused to customers by unscrupulous sales pursuit of targets. They even have a sticker (with its own ten-point checklist) something like this. 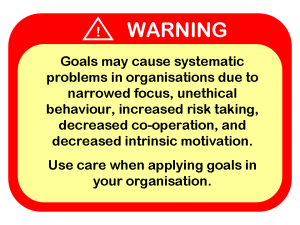 I struggle to think of any sales team I’ve ever encountered that has not had explicit targets for its salespeople.

The simplest is an overall revenue number. You find the introduction of profit often follows. Then you get sub-categories, based on markets, products and other slices. These are universally recognised.

KPIs are generally considered to relate to actions that directly impact results. Calls per week, Proposals delivered, that kind of thing. I’d say most salesforces feature such measures, although often in an informal manner and without documented sanction for underperformance.

KSOs though are usually ignored as an unnecessary extra layer of sophistication. Yet it is precisely these kinds of measures that the aforementioned paper in part recommends.

I should state that in all my intimacy with several b2b solution selling operations, I’ve noted this construct utilised only rarely. And then there’s been two differing definitions. One merely mimics KPIs in a management-by-objectives style. The other is a more ‘soft skill’ extension with a pinch of growth thrown into the mix.

Nowhere have I seen the concept of personal development, the ‘learning’ referred to earlier, incorporated as part of an individual salesperson’s documented goals. Surely this is a startling omission that requires immediate remedy.