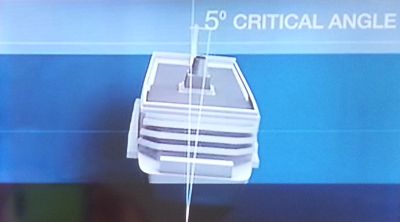 The cruise ship that sunk this week brings heartbreaking scenes from Korea.

Sudden turn, hitting rock. Authorities as yet unsure what may have caused the boat to capsize. The crew allegedly culpable for wasting a critical 30 minutes without issuing the ‘abandon ship’ command. The devastating loss of such young life saw the Captain charged with going through too narrow a channel and a reckless manoeuvre.

The two shockingly swift hours which saw the liner vanish was not lost on news editors.

The BBC explained the “point of no return” through my screenpic above. Once a ship apparently lists at five degrees, it cannot right itself. It becomes doomed to topple underwater. Factors combine. Momentum, all cargo shifting to one side and inrushing water taking hold.

There’s clearly no comparison between such a tragedy and a lost deal.

The notion of ‘point of no return’ though did alarm me from a Sales perspective.

Such a relatively small sounding tilt from where nothing can right your vessel.

Those seemingly small shifts on a bid that somehow hole you beneath the waterline.

Are you aware of them? Specifically, does your ‘process’ isolate when they may occur and either head them off or, if they do strike you, then either provide the possible remedy or allow you to bow out?

We face our own hazards that can sink our ambitions as we plot our passage.

One further concern is that when you heel beyond the degrees from which you can continue to float, many a rep will stay onboard the bid regardless. Evacuation in the lifeboat of qualifying out remains stubbornly ignored.

In neither case do I refer to the typical cut and thrust of oscillating buyer preferences. This is about showstoppers. They may be seen as inconsequential at the time. Dismissed as events that’d blow over. But they have the power to abruptly end your journey, with destination never reached. Are you on top of ensuring these do not cost you?