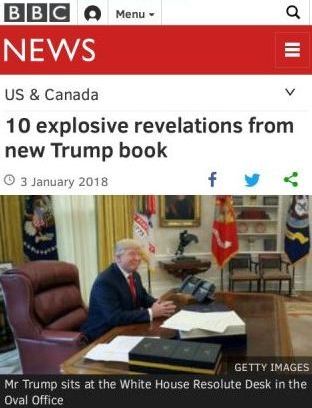 Sjoe. As an Englishman, I’m certainly no hardcore gun-tooting bible bashing Republican. I may even be a social liberal. But I was appalled at the imbalance and partiality of Wolf Blitzer and his CNN Leftists this week. Specifically how they wet their pants with excitement at teases of a book release.

Apparently My Boy Donny is mentally unhinged. The dBBC (despite Brexit Broadcasting Corporation) naturally got in on the act. Salivating over ‘11 explosive claims from new book‘. Which as you can see from the original screenshot above, was initially only ’10’.

A prominent former aide appears disgruntled. Happy to stab the metaphorical knife not so much in the back, but right out in front for all the world to see.

This level of bias quickly becomes a tortuous watch. How grateful I was to be saved by the awesomeness of the epic Arsenal Chelsea EPL match that night.

For all the Left’s teeth gnashing, “Explosive” 8 of the dBBC’s assassination merits deeper Sales assessment.

The WH was not unsure of what it wanted to do at all. The problem was that it didn’t know in which order their plans ought be ranked, nor where urgency applied. The quote given is allegedly from the then new deputy chief of staff;

‘Just give me the three things the president wants to focus on.’
‘What are the three priorities of this White House?’
It was the most basic question imaginable…

Regardless of where you sit along the Trump Scale of nutter or winner, this question is a belter in solution selling. It is overwhelmingly essential to get a grip on where the overall business priorities of your prospect lie.

Indeed, many internal dialogues can revolve around the current hottest must-do edict of a chief exec.

In addition, you should gauge from the swiftness and clarity of response from your contact both how cemented or communicated these are and how aligned to or involved with them they may be.

‘With so much to always get on with, my dear prospect, what’s the one top thing you’re mainly working on right now?’ would be a start…