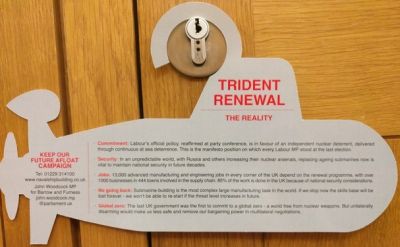 Stop the press. Someone from The Left makes a winning pitch. Who says bipartisanship is dead?

I was delighted to see this deployment by John Woodcock MP (for Barrow and Furness). A tricky Westminster vote on keeping the submarine-based nuclear deterrent (“Trident”) loomed.

So he elected to canvas his parliamentary colleagues with a leaflet.

In the shape of a sub. His main points writ large. Duly hung on each Member’s office door.

Referred to across the media mainly as his ‘paper submarine stunt’, he did indeed capture the limelight for his position.

His double-sided printed card outlined on one side what he thought were “red-herrings” of ditching, and the other, “realities” meaning we must keep.

I shudder at how difficult it might be for us to do something similar on our big bid.

I’ve never seen a guillotine for curves. And my own efforts with rounded scissors look suitably juvenile.

Yet there is a superb tactic here waiting to be unleashed.

Just one handout in a big meeting. Cut in a shape that means something to your prospect. And don’t forget the simple messaging (which here was red-herrings/realities).

It’d certainly help set you apart. A surefire deterrent for those that lobby against you.