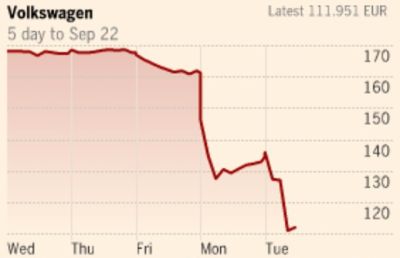 Volkswagen’s share price drives off a cliff. The world’s largest car maker saw 25 billion euros wiped off its value as this week its stock tanked by a third.

All because it cheated. In an astounding way.

Which knew to turn on emissions controls only when a vehicle was being tested for pollutants.

At least eleven million diesel cars worldwide seem to have such maskware onboard.

As authorities everywhere rush to punish this rigging, I think of solution sellers’ regular encounters with this kind of deceit. Here’s a trio of example scenarios:

An incumbent you wish to unseat claims spectacular superior capabilities from an as yet unreleased but supposedly upcoming product.

A Financiosi voice prospectside insists that your business case won’t stack up, due to upcoming circumstances uniquely privy to themselves alone.

Your own delivery arm refuse to participate unless you vastly increase the time (and money) their vital cog covers on your quote.

Unmasking these requires rigour and vigilance. In each case, ‘test conditions’ must be set by you and in stone well in advance. Among many other traditional Solution moves.

Then there’s the scientist belief that emissions anyway are four times higher on the road than in lab tests.

How are you setting the tests now whilst also ensuring that there won’t be a discrepancy between planned and actual by a factor of four? What’s your plan to expose these foes?