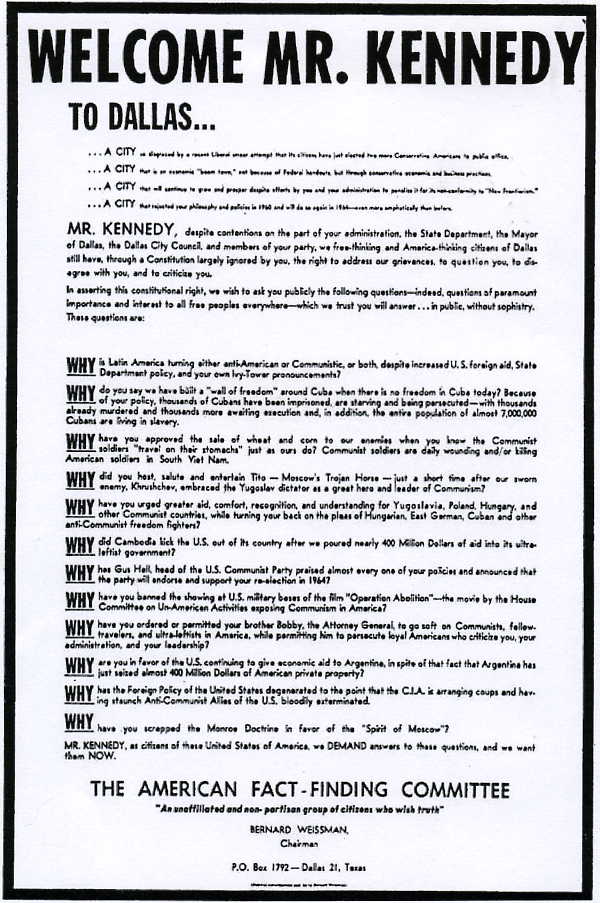 History can be a baffling arbiter. Especially when ‘written by the winners’. I really struggle with revisionism, and this week I’ve felt bombarded by it.

On the 50th anniversary of the US President assassination, documentaries abound. The most entertaining, naturally, are those that give prominence to conspiracy theories.

Unfortunately, these are outweighed by journalists gushing forth the Kennedy legacy. They nearly all suggest that here was a man that could have changed the world. We were robbed of genius. His achievement was only just getting going.

On the cusp of switching over from a cringingly partial schmaltz fest, all of a sudden came an opposing view. And what a glorious way to introduce it.

On the morning Kennedy arrived in Dallas he was greeted with a remarkable welcome. In the form of this full page ad tucked away in the local rag, as pictured up top.

The ‘concerned’ of Dallas clearly felt JFK akin to Red John of Boston. They amass a dozen questions, each aimed at highlighting how much of a communist sympathiser he must surely be. Quite incredible.

As much as I yearned to hear a balanced analysis, this seemed to go from one extreme to the other.

Still, I couldn’t help admire the structure of this ad.

In fact, if I were running a salesteam meeting this week, I’d put this ad up on the big screen (you can show the Wikipedia page pic) and set a quick ten-minute task.

Each salesperson simply writes up their own list of Whys – related to a deal recently appeared on their forecast.

They needn’t conjure twelve, but at least should be able to generate some winning Whys which expose our Proposal being preferable as against any alternative. From incumbent, new competitor, the status quo, procrastination, change of goalpost.

They perhaps shouldn’t be quite as aggressive as those Kennedy faced. After all, you don’t want to be seen as an extremist.

You could even suggest a softer set. Hows, rather than Whys.

After 10mins brainpower on their own and say, no more than half-hour round the room, I fancy you might even gather a list of themes. Ones which can apply across the board and help push an excellent new nuance to your overall pitches.

WHY would you spend 2x on something tomorrow, when you can partner with us and only pay x?

That kind of vibe.

I’m blogging this on a train. Making me realise, that if you don’t run a team but do have a decent recent deal arise, then you could always spend a cheeky ten having a go at your own set of Whys and seeing where it leads.