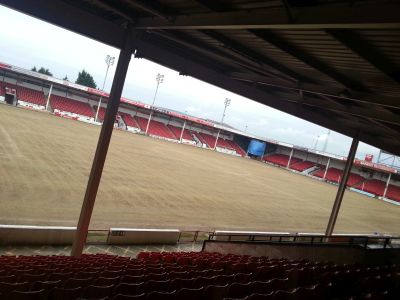 The pitch about to be relaid at Banks’s Stadium, ahead of the new season, Summer 2015.

Early days for sure, but they proudly sit atop their division. The rare heights of the next tier tantalisingly beckon.

On a “crest of a wave”, their manager revealed that he thought the current success was founded in him instilling what he termed “old-fashioned values”.

He explained these by saying how he began them with the youth teams. Here’s the three he picked out. Each player must;

I wondered on any analogy between this lower league improvement and a winning Sales culture.

An insular and mollycoddled team tends to fail at any level.

Yet direct parallels didn’t quite feel right; explain your performance to other departments, gather your own leads, do your own demos.

Then I thought about ‘old-fashioned sales values’.

Let’s not have ephemeral and awkward replace valued and trusted.