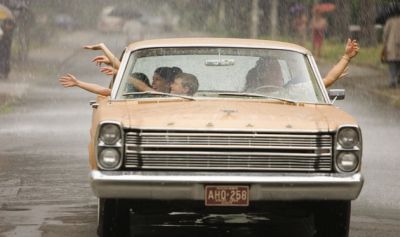 So there’s a 2008 Hollywood biopic about the American lecturer who truly invented the modern day windscreen wiper. It’s called Flash of Genius.

I caught it for the first time over these holidays. Two Sales observations hit me. Here’s the first (tomorrow the second).

During the film’s denouement we hear Dr Robert Kearns describe his “flash of genius”. In part, he does so to invoke 1941 Patent legislation that stipulates in order to be protected, your idea must be traced back to such an occurrence.

Those of us in the real world (ie, outside of America, hehe) know this as the Eureka Moment.

For our hero, his blindness on his wedding night caused by his first-ever, calamitous champagne bottle uncorking sparked his interest in the workings of the human eye. His subsequent invention built upon biomimicry of a blinking eyelid; why can’t wipers change rate like eyelids?

As the viewing audience, you lap it up.

Everyone loves such stories of creative spark.

It needn’t be the quantum leap style realisation of the movies. An “adjacent possible” can be just as powerful. That’s where you stand on the shoulders of giants. Build upon work done elsewhere, and uniquely take things to the next level.

Any similar explanation of where an idea behind one of your products came from is precious.

Treasure it. Use it freely.