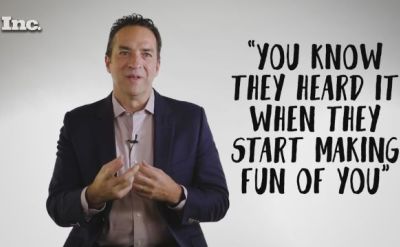 Here’s insight credited by an Adam Bryant (pictured above) on a 90sec Inc mag clip to a Marc Cenedella of professional careers site theladders.com.

Something very much worth pondering as the New Year kicks in.

It can be a wonderful thing.

He implores that “you can never leave a void of communication”.

This is the same on a Sale as it is for anyone running a show. Whether it be department, startup, conglomerate.

Even though “you can say something seven times to people and they might not hear it”, as the screenshot up top states, “you know they heard it when they start making fun of you”.

In the sense that they’ll pre-empt your mantra. Your motto does the equivalent of appearing on merch and becoming a meme. Docs and messages have elements as decorative flourishes.

Imagine being on a bid. There will be a central number, plank of argument, sunny beach beyond the grey foreground that can be summed up in a snappy refrain.

You can keep on saying. Over and over.

And when your potential buyers ‘take the mimic’ a bit, you’ll know you’re in.