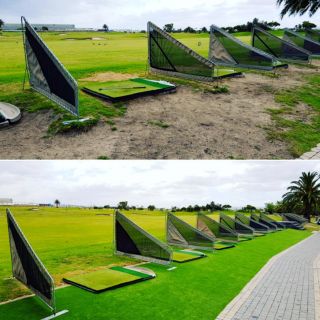 It’s a lovely example of the classic “before & after” treatment.

I ought disclose that I glow slightly in the pride of suggesting such shots were taken by them in earlier days of their blossoming enterprise.

This can be a much maligned trope.

All those faked diet and workout shots of flabby-now-toned bodies haven’t helped.

Yet in the business arena, there are winning alternatives.

I’ve blogged previously on memorable before and after ideas.

(From pop-culture too, remember the stunning Japanese sinkhole repair twelve months ago, even if it did need retouching a little later. And the concept is a staple of the ad/marketing, particularly when improving upon a previous presentation, such as with design. Like a few years ago from a bit of business-reality telly packaging revamp.)

I imagine helping a salesteam to better performance could be smilingly shown first by a snap of an office full of reps-at-desks. Then compared to a later one where only an admin presence remains. Due to the sellers all being busy out at prospects.

A touch of the tv makeover show about it.

So get your thinking caps on. There will be a before/after image pair lurking within what you unleash. How can you show it with similar overcast-to-sunny pictures?