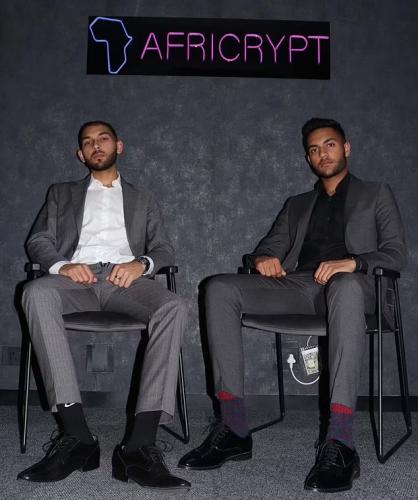 This is a photo of two S African brothers. Wanted for questioning over a huge ‘loss’ of bitcoin.

Dozens, scores even, of crypto investors are in legal proceedings over a sum of perhaps 69,000 ‘missing’ bitcoins. Worth potentially billions of dollars.

The pair above claim they are victims of hackers. They and their exchange having been targeted by organised crime.

Those out of pocket wonder why the 21 and 18 year-olds fled to new lives in the Pacific archipelago of Vanuatu eighteen months ago.

Local media – in a country where judges, not juries preside over verdicts – are scathing. They claim a Ponzi scheme in play. Labelling it ‘the world’s biggest crypto heist’.

The most favoured photo to use across the world’s media of the two appears a version of the above pic. Described as a ‘promo pic for their firm’.

It is clearly the founding brothers’ space. As they sit beneath the neon name of their exchange; Africrypt.

The image above is not from the most flattering of angles. Itself a good pointer for our own visual portrayals. They seem to have missed the posture class at etiquette school too. And isn’t funny what the choice of socks can say about a man?

Yet there is one item that instantly glares at me.

The plug socket, underneath the right side seat.

What on earth (sorry to pun) is that all about?

What is plugged in?

But then there’s a cable out of that. Which in turn defies gravity. Going north to nowhere.

For a promotional shot (if indeed that is true) you’d surely at least put something resembling a small panel in place to obscure all those electricals.

In part, another reminder that we neglect to consider our background when having a snap taken or zooming in at our peril.

A little bit of disorder around you on-screen can be quite rapport building. Not everyone can be squeakily perfect after all. Yet if you peddle leading edge tech, then you better look the part. And this visual does not.

Have you got any wonky wiring behind you when you’re in frame in order?