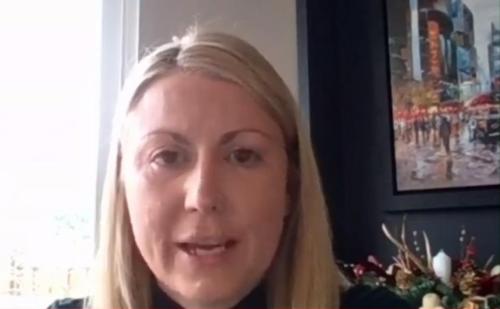 This is the chief exec of a pollster. Zooming in to a rolling news media slot. Possibly from her London office. Perhaps adorned with a Japanese streetscape, above the plantlife and candles behind her.

An industry staggering in its ability to continue to gain itself unquestioned coverage. Despite having such little credibility they might even for a moment make a government scientist look vaguely competent.

She gets points for securing herself PR from the company’s annual predictions.

I’ve blogged before on the SKO power of a predictions slide of your own. Indeed, what annual launch event can be complete without one?

Such options include both current and future trends, and revisiting previous crystal ball gazing.

Which reminds me of another lovely line you can deliver when setting up this topic;

I never make predictions. And I never will.

Kelly Beaver above’s Ulster tones spoke deftly of what the Great British Public thought the heritage of the next James Bond actor might be, the 60% chance the Prime Minister wouldn’t see out 2022 in-post, and the half of people that think it inevitable Putin will invade Ukraine (please, no). As well as international opinions. Which among others suggested MSM the world over has been captured by lockdown hawks, given the numbers (47%) thinking a deadlier virus will evolve this year.

There’s even a 37-page pdf downloadable from their site. From which there is a note of optimism that 2022 is felt will be better than 2021. And an alien visitation is unlikely.

Of potential interest to our selling worklife, here’s one of their slides (note too the colours used for +ve/-ve).

WFH may be almost three-quarter ending, yet video calling shall only grow. Especially in Sales.

You could take a leaf out of the pollster book.

Beyond a ‘cc-all’ email asking for such likely/unlikelys responses as here, you could ask around beforehand for a ‘top three’ of predictions. You could also separate or focus them by market, company or specific item/effect. Then collate and present.

The point being, there will be a message from within that will align with the direction you seek.