A/B Testing. A winner from worlds as seemingly disparate as market research and computer coding.

Huge media disrupter Netflix just shared insight into how they conduct such tests to best ‘present’ their wares.

Their image above shows which of eight options garnered the most clicks for the show in question.

There’s three takeaways for the Powerpoint pro (or crack Keynote or insert your own loved alternative) salesperson. Not only for those of us seeking to spice up a particular slide, but also in crafting the currently vaunted ‘infodoc’ (basically a single slide or at a push a couple that get across a key point post- or pre- pivotal meetings).

So they reveal their internal findings that if a user browses for a minute-and-a-half without finding anything they wish to watch, they go.

It strikes me that just as the goggle-eyed may have a natural limit on how long they’ll scroll around a carousel, so will our prospect when determining what to read. Admittedly a single slide as an image file is simpler to tap onto, but all the same, if you don’t give compelling reason to click then you’ve lost. And our time is way less than 90secs, may well being closer to the crazy 1.8 seconds each Netflix image gets centre stage, right? 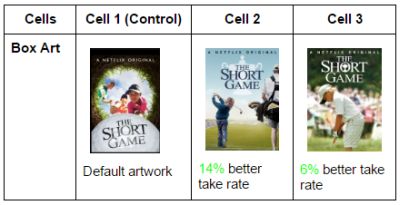 This is trickier for us. In the world of on-demand video, the results from The Short Game movie are instructive. Neither A5 dvd cover nor giant roadside billboard artwork is automatically suitable for gaining mobile thumbnail or plasma screen attention.

I’ve blogged before this year on designing sales messages to specifically work on a 9:16 template. And here’s another reminder.

They reckon most streams start from pics with people in them. But not more than three though. The images up top show two outgun a one. In that case too, it looks like an unusual expression also helps (“Emotions are an efficient way of conveying complex nuances”). Who wants to click on an oh-so-typical smile or boring passport vacant stare?

Although we must surely use with extreme care their finding that pics of baddies gain greater response.

Background is also significant.  No background at all is beaten by something different going on behind (or alongside) the portraiture.