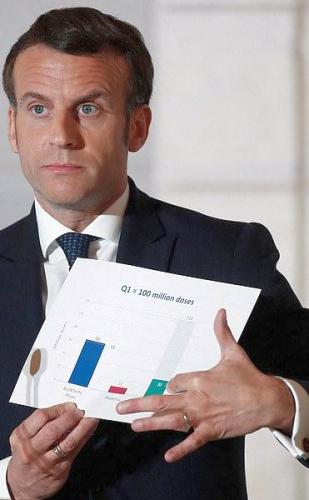 Who is the most incompetent leader in Europe?

That’s a toughie, for sure. So much competition.

Add in to the mix, ‘who is the one most in denial’ and you’ll be busy down a wormhole with little chance of escape.

France President Macron has got to be up there though.

I’ll try, if I can, to get over his astonishing anti-British stance. On any and every issue.

Focusing here rather, on his flailing over his pitiful vaccine planning and rollout programme.

Earlier in the week, he uttered these words. (Keen not to miss yet another opportunity to insult Britain by omission).

“We didn’t shoot for the stars. That should be a lesson for all of us. We were wrong to lack ambition, to lack the madness, I would say, to say: It’s possible, let’s do it. You can give that to the Americans, as early as the summer of 2020 they said: let’s pull out all the stops and do it. They had more ambition than us. We didn’t think [the production of a vaccine] would happen that quickly. Everybody, all the experts said: Never in the history of mankind was a vaccine developed in less than a year.”

Note to self, son. “the Americans AND BRITISH”. Thanks.

And so much to unpick. To correct. Such as every ‘expert’ I heard on English media at the outset thought coronavirus immunisation could begin before the end of 2020. And guess what happened… But not in France.

As for his constant yet wildly inaccurate trashing of Anglo-Swedish geniuses AstraZeneca, well, he has cost the lives of countless fellow countrymen and Europeans with his nonsense.

Which down the line, might even usher in a Far-Right loon into his present palatial seat.

He continues to show he knows no shame.

As evidenced by these press conference snaps. With vacant stare as standard. Holding up a chart.

Now I do so love it every time a politician does this. Most recently the marvel that was Donald Trump. Miss him yet?

Macron was trying to make some misplaced and vacuous point about manufactured doses being somehow withheld from his paws. What utter tosh. And as I understand it, there’s more production capacity in the UK than Europe. And expertise too. When the Euro-plants struggled to work, it was the English wizards that went in to fix. Macron, obviously, remains ungrateful. And rants like a tinpot tyrant.

He aims to remedy what he labels “diesel” Europe.

The French Sanofil efforts, which naturally he attempted to foist upon the rest of Europe as the answer, failed to deliver a single vial.

So now he turns to the magic of the barchart to seize supplies not his. Already ordered by others. And paid for.

Yet he made sure all of Europe heard his edict earlier this year that this very same vaccine was merely “quasi-ineffective”. Contemptible.

Take from this sorry episode though that holding up a barchart is a good thing. A winner on a sales call.

Bear in mind to ensure it is simple. Only three bars here. Good.

Yet the message must be solid. Unlike the flimsy one here. Then you’ll leave your diesel competition behind.