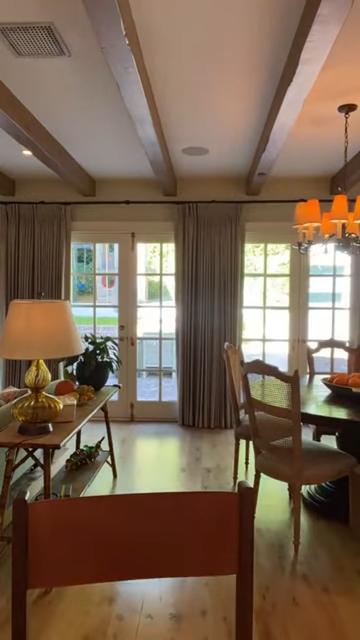 A name known to all. About to plaster the public psyche with the imminent release of her fourth album ‘era’; 30.

Or more accurately, a room in which Adele sat. As she spoke with her adoring faithful.

She broadcast her, so she said, first ever Instagram Live over the weekend.

Many of whom kept sending her ‘join video’ requests. Which she wisely declined. Albeit in the name of not knowing how to do it.

There’s many uploads of this ‘event’ on Youtube. Who knew there were even accounts specialising in keeping such fleeting celeb ‘content’ for posterity.

Undoubtedly another PR triumph, let’s see how Adele – given her exposure to the most expensive image consultants money can surely buy – presents herself when on a video call. As done by portrait screen phone. And what can we take from it on our business calls?

Do I sound like an old cynic when I suggest this may not have actually been Adele’s own pad? {Turns out, it is though, all $9½m of it.]

This moment up-top occurred when exiting stage left to go fetch her pet.

The room looks so pristine and clean. Unlike any I’ve ever seen where an eight year old boy can wander around. No giveaway signs of actual living in there. Certainly no detritus associated with a young tearaway like, no doubt, her son Angelo.

Later, she mentioned that she couldn’t really get involved with orange juice because they’re citric and not good for her (voice/vocal chords). So why the bowl of what look like large Naval oranges on the table?

And everything’s all a bit beige. Or even worse, greige. Given previous glimpses into her style, the last place you’d expect her to call ‘home’ is somewhere looking like her mother’s might have at the end of the 90s.

Is it a piece of outdoor garden furniture? Yet it does feel like it’d make a perfectly serviceable zoom stool. Doesn’t swivel, nor squeak, and cannot be seen when in it.

Special mention for it being slightly at angle here as well (aka, the Rembrandt pose). As we shouldn’t be always gun-barrel straight-on down the lens.

Seldom though does she look the viewer in the eye.

Spending most of her time looking downwards where all the text of questions flash by.

Maybe the curators missed this trick. A purpose built phone stand costs only a tenner to raise the eyeline.

There was a brief utterance at one point along the lines of, ‘I’ll turn Ghost off’. Which may or may not have made reference to a pro broadcasting app. So perhaps a full-on studio set-up was in fact present beyond our gaze.

Normally, windows behind shining daylight through would be a no-no. But Adele gets away with it here. The depth of the shot has a lot to do with it. As well as sunrays not flooding directly in. And she herself is well-lit.

I’m also reminded of the tactic of the frieze when you have such an angle to play with. A curtain rail and ceiling beams can readily be accompanied by a neat touch of elevated messaging in our hands.

A word too on attire. Note that a simple, single-colour dark top can really be all fine.

And let’s not forget the pair of ‘props’ displayed.

Sipping a liquid of coffee-coloured variety. From what feels like the kind of see-through plastic beaker Adele carried home with her from her local pub’s beer garden the Friday night before.

Last and by no means least, the pet puppy, Bob. Who gets attention and a kiss for appearing.

Even on our calls, these can be handy props to have. Although (as my related book chapter lists) there’s a whole raft of alternatives that’ll make us stand out on our calls.

We will be expected to do a video call from our phone at some stage. Usually for a one-to-one. But not always. So it pays to give how we come across that little bit of attention beforehand. Then you’ll be a ‘hit’, like Adele, and not the ‘miss’ you’d otherwise likely suffer. 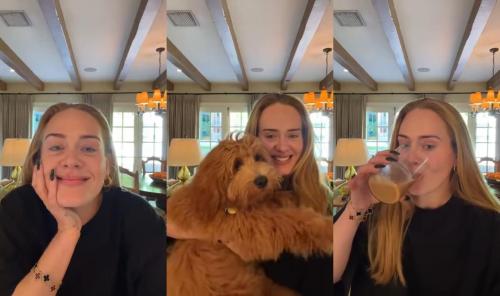 awaiting start – with Bobbiddybob – drinking a beaker of ____