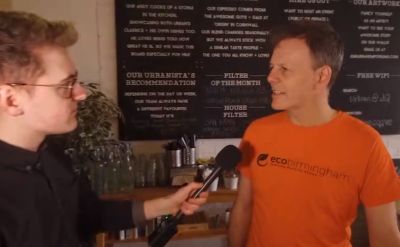 Birmingham, which has some of the finest tapwater on the planet as piped in from pristine crystal Welsh lakes, recently launched their push. On a local tv news website organiser Michael Addison was first asked, “What is it you do?“:

“Okay well I’m the director at ecobirmingham and we’re a charity in the city that’s here to make sure the city becomes as sustainable environmentally as possible. And one of the key things is reducing our impact on the planet.”

A laudable vocation. An opener though, that could do with its own refill.

I certainly feel that this ‘so, what do you do, then’ is the intro question that trips up a majority of salespeople. You’ve a chance to make a brilliant first impression. Yet most reply in similar fashion to this noble campaigner. How can you ensure you don’t miss a trick with this one?

I’ve blogged on this throughout the years. From the superb Golden Circle switch to major on the problem you’ve laser focus for solving. (You often hear examples in the media too; like from video marketing from 2015, water pumps in 2016 & even a 2018 band fielding a newer flavour of the same staple – which Derren Brown might prefer you use.)

During two minutes of screen time many pitch bullets flowed;

You can take some of this purpose and apply it to the bio explanation, avoiding jargon naturally.

You never should waste breath saying your job title, type of firm, nor any lofty mission. So pretty much all of what emerges here is redundant. You’ve a precious ten seconds. None of that example grabs the attention.

What is it you do? Ending unsustainable, environmentally catastrophic single use plastic through encouraging people to swap in their own water refill bottles.

Something like that perhaps. Although my first-run is still a touch unrefined. As I made that up in just a same ten second window. So with their nous, it could be happily smoothed for sure.

Note I began with a problem, and rounded off with the action sought.

Are you preparing with something similar in your arena?